In a new report and webmap on the longstanding crisis in the Central African Republic (CAR), IPIS points out that access to resources remains the predominant driver of both armament and conflict in CAR. All armed groups operating in CAR  are engaged in predation on one or more economic sectors. Such predation is not only a key determinant of an armed group’s movements and activities, but provides essential sustenance to its rank and file.

Two thirds of all reported incidents are characterised predominantly by violence against civilians, particularly in key pastoralists and mining locales. Roadblocks generate revenue for both the state and armed groups and roadside taxation has reached such an extent that it asphyxiates the  economy. Humanitarians are increasingly targeted.

Read the report with issuu reader: 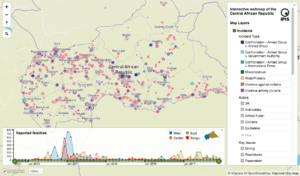