Africa’s domestic defence industry remains relatively unknown. Therefore, the International Peace Information Service (IPIS) and Omega Research Foundation have compiled a database of the main entities comprising this industry, including companies that manufacture, assemble or maintain: arms and ammunition; aeronautical components; vehicles; as well as importing and management companies. This data has been mapped to give an overview of the industry’s size and geographic layout.

Whilst in the 1970s the number of African states with a domestic defence industry was still limited, a significant increase can be seen today. Data is hard to obtain and in some cases the manufacturing capabilities of companies is uncertain [e.g. the alleged small arms and ammunition production in the Democratic Republic of Congo (*)] or has become uncertain (Burkina Faso, Zimbabwe). Current known capabilities range from the assembly of armoured and other vehicles as completely knock-down kits (Algeria, Egypt), the manufacture of aircraft components and aircraft maintenance (Morocco), manufacture, maintenance and assembly of naval vessels (Algeria, Namibia, Nigeria), the transfer of technology to manufacture munitions (Algeria, Egypt, Ethiopia, Sudan, Tanzania, Kenya, Zimbabwe), the licensed manufacture of small arms and light weapons (Egypt, Ethiopia, Nigeria), artisanal small arms manufacturing (Ghana), to domestic weapons development (South Africa).

The overwhelming majority of these companies are state-owned, or have the state as majority shareholder, however a growing number are privately held (e.g South Africa’s Paramount Group, Nigeria’s Proforce Ltd or Namibia’s NAMDOCK).

The major manufacturing states are Egypt, South Africa and Sudan with major companies and exporting capability. Algeria, Morocco, Nigeria and Ethiopia are currently investing in their defence industry in order to grow indigenous capability. Many African states have the desire to build a defence industry but almost no capacity to do so. To be viable this nascent domestic industry will also have to focus on exports. One example is the South African Paramount Group which has signed agreements with several Middle East and Asian countries to participate in the further development of local defence industries (Saudi Arabian Military Industries, Kazakhstan Paramount Engineering, and Indonesia’s PT Pindad), and expects to sign agreements with four African countries in near future.

In the foreseeable future one can also expect closer cooperation between the African companies, such as the development of the ST-100 and ST-500 armoured personnel carriers (APCs) for Egypt’s International Marathon United Technology Group (IMUT) by South African Saksa Technologies. 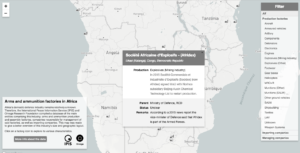