Since the end of 2018 witnesses and victims of incidents and accidents related to artisanal small-scale production, transport and trading of minerals in the provinces of South-Kivu and Ituri can be reported. IPIS, in collaboration with the Bukavu based Expertise Centre on Mining Governance (CEGEMI) and Ulula,has developed a new, anonymous reporting system.

The tool allows civil society organisations in eastern DRC to monitor incidents (mine accidents, violence, illegal taxation, fraud, interference of armed groups, forced labour, child labour, road blocks) reported by members of mining communities. Anyone who wants to report an incident can send the word “kufatilia” (which means “to report” in Swahili) to one of the following Congolese phone numbers 08 50 29 12 51, 08 24 44 33 91 or 09 74 72 91 00, whereupon she/he will automatically receive an incident survey.

The tool is accompanied by a publicly accessible interactive webmap, allowing stakeholders (local authorities, civil society, private companies) to get insight into the status of these incidents. The webmap shows the number of reported incidents and their geographic location, as well as their follow-up status. The map is updated in real time.

Local partner organisations which have been working with miners’ communities for many years, can access the incident online database via a login, to validate, monitor and follow up reported incidents in a transparent, independent and participatory way.

Thus far about 100 incidents, related to artisanal mining activities in South Kivu and Ituri, have been reported. Some of these incidents have been resolved in the meantime, others are still in the follow-up process. 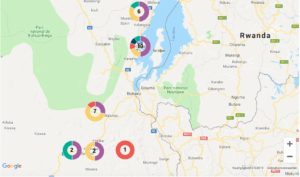 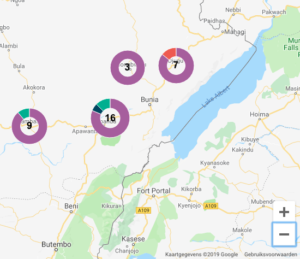 Zooming in on the province of Ituri.