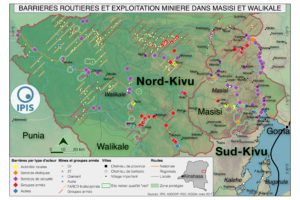 French version below – version française ci-dessous Roadblocks are a ubiquitous phenomenon in Eastern Congo. In an effort to map the scope of this phenomenon as well as its significance in the political economy of conflict, IPIS has embarked on a collaboration with the Danish Institute for International Studies. The point of departure is that […]