IPIS recently updated its interactive webmap on artisanal mining sites in Eastern DRC with data on mining site qualifications from 2016 and the first half of 2017. This minor update is part of a continuous effort to provide an up to date view of the situation on the ground, which is in constant evolution. The webmap’s main data layer originates from mining site visits carried out by IPIS since 2009, with a last major update in 2015 and new data collection campaigns currently under way. These campaigns collect data on the on-site presence of armed groups and the Congolese army (FARDC) as well as indicators of the relative importance of the site. Additional data such as the recently updated ministerial mining site qualifications and the presence of supply chain control mechanisms provide relevant contextual information about the situation of the mines. 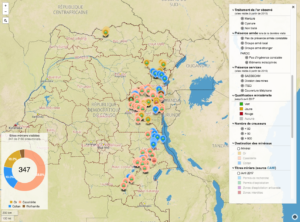 Ministerial mining site qualifications have been issued for 3T and gold mining sites since 2011, and arose in the context of the ICGLR Regional Certification Mechanism (RCM). The system has been put in place with the support of BGR and aims at ensuring that gold and 3T minerals are sourced from sites that are conflict free and meet minimum social standards (e.g. absence of child labour), with new mines visited every year and revisits performed as often as possible. The standards used for evaluating mine sites are in compliance with the procedures and standards found in the OECD Due Diligence Guidance. The qualification missions are known as ‘joint missions’ and include both a government mine inspector and a third party auditor, accredited by the ICGLR.

As a result of a mission, a mine is classified in one of the following categories:

The qualification data for these mines can be explored using the interactive webmap by filtering for specific types of qualifications and clicking on specific mines to open a pop-up window containing more information. Under ‘Présence Armée’, the subsequent qualification missions are displayed in tabs, which display the factors that lead to a red or yellow qualifications in such cases. These may include the armed actor that was present and the type of interference that was observed.

As one can discover using the interactive webmap, most yellow and red qualifications were issued in 2011 for mining sites around Walungu, where the presence of indisciplined FARDC elements was observed at the mining sites, who were found to issue taxes on the mining activities.