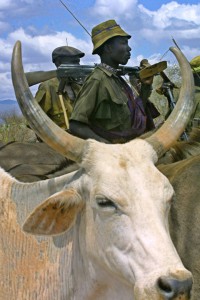 A Turkana herder watches over his livestock at a watering hole in 13 March 2006 near a village along the shores of Lake Turkana approximately 800km north west of Nairobi. Rife with with tribal tensions over pasture and water resources, villagers in the region bordering Uganda, Ethiopia and Sudan have resorted to arming themselves to stave off cattle raids. AFP PHOTO / TONY KARUMBA