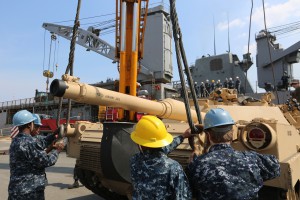 U.S. Navy sailors attach crane wiring to a U.S. Marine Corps M1A1 Abrams Main Battle Tank at the Gwangyang Port, Republic of Korea April 1 during exercise Freedom Banner 2014. Throughout the on-load two 427-ton cranes loaded six M1A1 Abrams Main Battle Tanks and five Humvees onto the cargo hull of the USS Ashland destined for Pohang, Republic of Korea, where they will support amphibious assault exercise Ssang Yong 2014, which is a component of Marine Expeditionary Force Exercise 2014. To attach the tank to the crane system a team of Navy workers attached clamps to the four sides of the tank and then stood safely away from the tank as it was loaded into the air. The sailors are all assigned to the USS Ashland. (U.S. Marine Corps photo by Lance Cpl. Matt Myers/RELEASED)